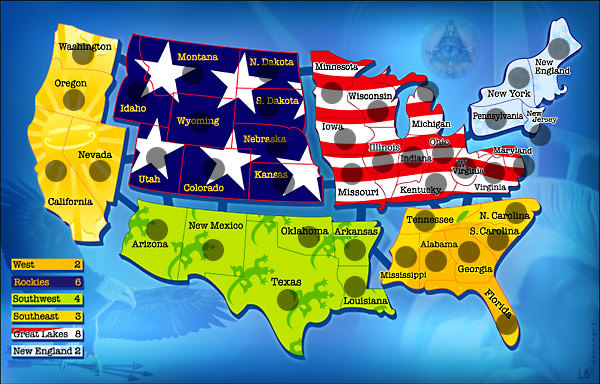 Introduction
The USA map is, as its name implies, a map covering America (only the lower 48 States are represented, Alaska, Hawaii and the overseas territories are not represented in the map). The map has 42 regions with 6 bonus zones. This provides a good sized map for 2-6 player games.

The USA map is a simple, conservative and classic-style Conquer Club map. It was released in January 2006 together with the Classic map - was the first game played on this map. The map relies primarily on region count advantage and zone bonuses to provide an edge in each game. Consequently, being a simple, old school map – what works on Classic generally works on the USA map.

The USA map’s 6 bonus zones also has been the inspiration for the “USA map pack”, a spin-off project consisting of six individual maps (each map covering one of the USA map’s bonus zones) released in 2009.

How to play USA