Map, Settings, and Strategy guides that have officially been endorsed.
Post a reply
10 posts • Page 1 of 1 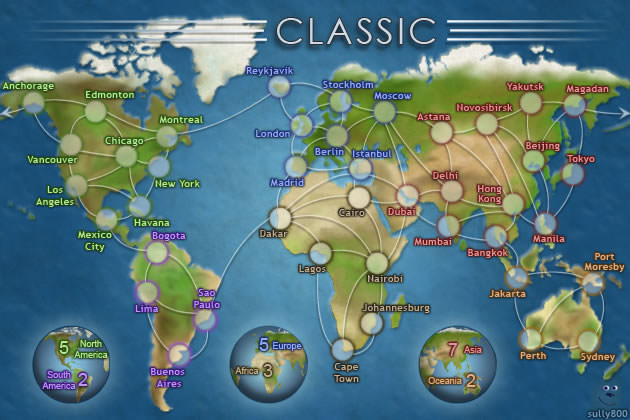 Introduction
The purpose of this short guide is to quickly explain the basics of the classic map and different forms of gameplay to the new player. A more detailed guide with tremendous amounts of valuable information is provided at Classic and Classic Style Maps.

The Classic map is the most popular map on Conquer Club. It is a basic map of the world, including 42 total regions and 6 bonus zones. It is a medium sized classic gameplay map. This is a very flexible map which works with almost any settings. An excellent map for doubles because both teams will start with a 3 troop drop and 10 regions. On the small side for quad games but workable.

How to play Classic

Ouch, that is pretty silly, just bad proofreading on my part.

Thanks for the catch. It reinforces the point that NA is a great long term bonus to hold, though.

What about the hard to get asia + oceania bonus?
All you need is to hold magadan, moscow and dubai...
Why Search?
http://WWW.allmyfaves.com

Shai wrote:What about the hard to get asia + oceania bonus?
All you need is to hold magadan, moscow and dubai...

I think if you hold Asia and Oceania the game is over. I agree that Asia has a pretty defensible border but getting the interior cleared is incredibly difficult. I suppose in a 3 player game there might be a situation where this could occur, though.

Some tips i have learned for non-team games on this map are:
example - colors: red owns south america (sa), green owns north america (na), and blue owns africa, yellow owns oceania, pink owns europe (eu)
1) (red, green, blue, and 1 other necessary) Once u control ur country, a good strategy is to kill red's armies in asia, because now they will have a very dificult time getting cards, and for pink or yellow, you have also forced red to place his armies in sa, both eliminating a posible threat, and weakening blue and green (who are forced to protect themselves from additional red troups in sa).
2) (red, green, blue necessary) If you are red, make sure to have at least some armies in asia for the reasons in #1, unless you can easily attack green or blue.
3) (red, green, and 1 other necessary) It is often very easy in the early game for red to take Mexico, thus preventing green from taking Na, and can generally hold it until much later in the game.
4) (green, and 2 others necesary) if you are green and if there is no red, or he is very weak, NA + SA is a formidable combo, +7 troop bonus, and still 3 entry points (2.33 troops per entry point)
5) (long games) On south america, it can be effective to defend ur border if you place a few troops on Sao-Paolo, and Bagota (10-15ish), and stack a lot on Lima, because people will be hesitant to unleash the massed army gathered on Lima, this can also be effective in europe, with small numbers on Moscow, Itsanbul and Madrid, while stacking on Berlin, and Reykjavik. One problem with this strategy for europe is that people on Oceania, or SA can attack you while u have a limited ability for counter attacks.

Due to the size of these games turn order becomes crucial because eliminations can happen in early rounds with either attacker's advantage or due to poor reinforcements.

What else would you e xpect from danryan?