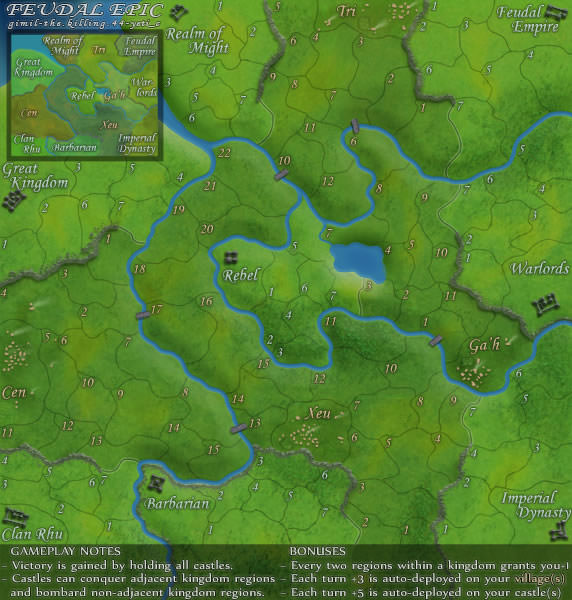 Introduction
Feudal Epic is the sequel to the widely popular Feudal War map, with an important difference: with 8 Kingdoms, 8 Castles (one per Kingdom) and 4 villages to be pillaged for bonus troops, Feudal Epic can be played with 8 players. It contains 128 regions, making it one of the largest maps on Conquer Club. Each of the 4 Villages gives you +3 bonus troops which are automatically deployed on the Village itself as soon as you start your turn. Each Castle gives you +5 bonus troops which are also automatically deployed on the Castle at the start of your turn. Each Kingdom has 8 Regions and gives 1 bonus troop per 2 Kingdom Regions held (and like Feudal War, each Castle counts as a Kingdom region).

How to play Feudal Epic
Generally speaking, this guide is written with Fog of War in mind because most games on Feudal Epic use that setting. I have some notes below on playing without Fog of War.