The storehouse of handy and helpful plugins/addons and webpages.

Updated - images are now below. Note, I forgot to grab the system message images - these basically show a popup message on your desktop for a number of seconds or a balloon popup above the windows system tray.

I've been playing conquerclub for a while now (user = simon.mann) and wanted to do some cross platform goodness on notifying myself when games were ready to play. as such I've developed an open source app indicator/system tray app for just that.

Anyway, if anyone wants to have a try just download the binary, extract it and run it from that folder. Then add in your username or userid, whether to show eliminated games and the interval in minutes between checking the game status and finger's x'ed it should work as expected. Note, the default check time is 5 minutes as that appears to be the default update time for a user feed.
It should change the conquerclub icon in your system tray when a game is ready and should also give you a system message - on windows it should be a balloon popup in your system tray and on ubuntu it should give you a desktop message. When you open the system tray you'll see a Config option which lets you change the config settings, a list of the current games and whether they are ready (clicking will open a browser to the game), a force check which rechecks the user feed and a quit option.

if you have any problems, bugs or crashes etc then just let me know and I'll have a look into it.

Images of the app in use:
On ubuntu using Gnome Shell: 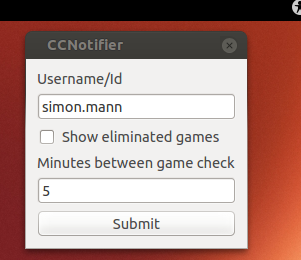 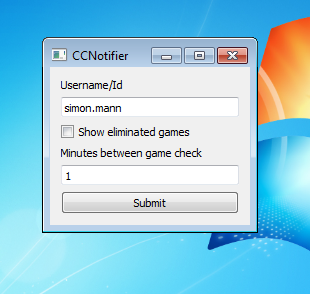 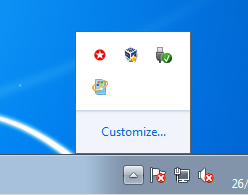 And on Ubuntu with Unity:

Tech bit:
Written in Python. Note, it was originally written using gtk and was then ported over to PyQt but I also have a PySide version running and might do a wxPython version and a Kivy version too. It stores your username and options in a sqlite db in the installation location (well, where you unzipped the code and ran it from).
I've tested on a couple of Windows 7 x64 machines and it was written and tested on Ubuntu 12.10 x64 and 13.04 x64.
I also borrowed a Mac laptop running Snow Leopard from my workplace at the weekend and was able to get it working fine but not to build binaries yet.
I have also had a version running where you could store your password so that it could auto log you into the site and then take you to the game (using selenium) which works fine on ubuntu and windows but on windows this adds a command prompt window in the background that if closed would kill the browser. If there was any interest in that feature then I could always look at reintroducing it.

Next up (after making sure it runs ok) is to write a version in Kivy for Android and possibly further down the line look at creating an IOS version.

Anyways, enough prattling, I hope someone can make use of it

Set it up just now. Config seemed to go fine. I'll let you know how it goes.

Cheers, just let me know if there are any issues and I'll have a look

I'm also playing with a chrome extension that does a similar job but uses the API instead of the user feed (I didn't know the API existed till the other day).
as such the desktop version may get an update to use that in the near future.

simon thanks for the effort dude.

I tried it and it`s not what i`m looking for. Now i don`t know how to get rid of it. There is nothing in add and remove software and i cant find a folder with the file in it. i followed your directions. I have 225 games going at the moment and when i clicked on the checkmark in my system tray i get a screen of a big list of games. there are so many, that i dont even see the force check button and i can`t navigate the screen to see everything. there is no scroll. when i click on a game, it opens up in explorer as opposed to firefox although i suspect that has to do with my default browser settings.

Anyway, i would like to undo what i`ve just done. Help needed. Thanks again.

sorry for the delay - I thought I might get an email notification for replies to this thread - I'll have a look at my settings.
Cheers for trying it out though - I'm only on a free account so have a max game limit of 4. If I had a paid one then I expect that I would find your problem with having far too many games displayed. With a bit of foresight I should have limited the actual list if greater than a certain number! sorry about that.
To remove it simply delete the folder you run it from. It doesn't hook into your system in any way and is completely standalone. I was thinking about creating an installer but only if there was any interest. If on windows then just check out your Downloads folder and see if there is a ccnotifier folder or similar.

On another note I've got a simple android app that does notifications when a game is ready, don't know if there is interest but it's built on Apache Cordova so could also be ported to IOS with a little work. If anyone is interested in the app or ideas on developing it then let me know

i installed and its in my system tray at the bottom right of my screen. HOW do I get it moved so its in my FIREFOX tool bar up near my last pass and grease monkey icons??

this isnt an addon for firefox. this is a program for your computer

dgz345 wrote:this isnt an addon for firefox. this is a program for your computer

with speed turns not working, it may become pretty useful though. Also helps that you don't always need to be on your browser.