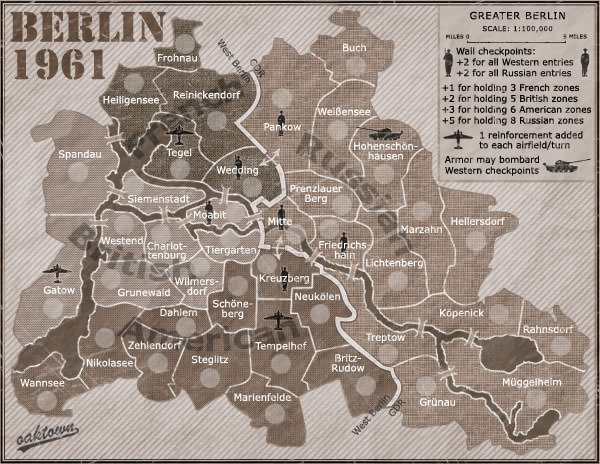 Introduction
This map is based on historical crisis of 1961 year in Berlin. The Berlin Crisis of 1961 (4 June – 9 November 1961) was the last major politico-military European incident of the Cold War about the occupational status of the German capital city, Berlin, and of post–World War II Germany. The U.S.S.R. provoked the Berlin Crisis with an ultimatum demanding the withdrawal of Western armed forces from West Berlin — culminating with the city's de facto partition with the East German erection of the Berlin Wall.

This map has 40 regions.
4 regions begin neutral: those holding the airfields and the artillery.

There are 3 kinds of bonuses on this map:
Auto-deploy bonuses: Airfields
Normal bonuses: Western checkpoints and Russian checkpoints
Collection bonuses: any other sector

I recommend playing this map with 4-6 players, preferably team games. A favorite setting of mine is Doubles, Escalating spoils, Chained reinforcements and no Fog of war.

show: Flat Rate And No Spoils