Map suggestions, ideas and drafts... They all start life on the Drawing Board. This is a very early WIP I knocked up today. It's a map showing the 37 provinces of Gran Colombia, the 12 departments they composed, and the 3 districts (Venezuela, Nueva Granada, and Ecuador, map says Cundinamarca by mistake).

There's lots of errors in the map and it looks pretty bad, I know. Pretty much everything will need to be overhauled, but I'd like some feedback as to gameplay and bonuses (I tried setting them sort of balanced but it's tentative). The idea is to have an extra bonus if you control the whole district also. Please suggest bonuses or different placement for rivers, bridges and mountains (mountains and rivers are decently accurate right now but gameplay trumps that)

As it stands, all Ecuador gives you 9 (and is fairly easy to hold), all Venezuela 11, and all Colombia 17. That seemed fair.

Another issue is the fact that Gran Colombia had 37 districts, but that's a bad starting number. I wouldn't like to cut any out, so I've been thinking of ways to swell that number, if that's super important. Maybe ahistorically split Guayana, Jaen y Maynas, and Casanare (as the 3 biggest provinces, which were least sparsely inhabited and later split) and add a boat in the pacific and one in the caribbean, for the magic number of 42. Or instead of splitting, add the district capitals of Caracas, Quito, and Bogota, plus the 2 ships. I'd be open to suggestions or leaving it at 37 if it's not that big a deal.

Nice area of the world; I like it. You need to take the image size down to meet the site standards –– also so it'll fit on my screen!

Graphically, consider the style you'd like to go for. Your image will do for now, as you're working through the gameplay elements and overall concept (drafting!). You've already got a time period for the map which should help inform your graphic style. An old cartographic map, or a map that represents the changes in territory over time – an Incan map that's been revised and drawn over the top of, or a map highlighting the resources & topography of the area, there is a lot to go on here.

I know you wanted more gameplay feedback, but I'm not really interested in that, so sorry! Nice concept & region.

u might be wondering why no-one is commenting on this map. one reason might be its size: it's so big that it does not fit on my screen. although u can work on the graphics at that size, i suggest that u post a copy at 800 x 610, which is within the large map maximum size guidelines, to allow players to comment on it. to see the whole map just now, we have to zoom out so far that we cannot read the text. u're not helping urself by making things difficult for everyone else!

Sorry guys, I thought this board was dead, and I wasn't notified when you guys responded.

I posted a smaller image, with some changes. Sorry you can't really read the territory names, I can fix that at some point. First, I added some sea routes for some mobility, I'm not opposed to the idea of adding a boat territ in between (maybe with a +1 bonus for holding both, but since they connect in panama, that might be unfair/unnecessary)

I also reworked the bonuses a bit. These were the previous bonuses: Instead, I was thinking about something more modular. Gran Colombia was divided into 3 judicial districts, Venezuela, Ecuador, and Cundinamarca (inc. modern Colombia and Panama). These were in turn subdivided into departments, which were subdivided into provinces (the territories in this map). So, I was thinking that any 2 departments in a district could give you +1, and any additional department within that district another +1. So, with 4 departments, all Venezuela would be max +3. Ecuador has 3, so that'd be max +2, and Cundinamarca 5, so max +4. These are obviously lower numbers than before, so I don't know if to combine it with separate bonuses for each department (which might be sort of confusing, but would help balance if a department is harder to hold). And/or, maybe holding the entire district should give you an additional bonus.

Another thing I added were the judicial capitals. GC's 3 judicial districts were relatively independent, and each district had its own supreme court, IIRC. I was thinking holding 2 would give +1, and all 3 +3. The +3 is purposefully high since that represents control of all the judiciary and political power in the country. I haven't decided if to make the capital be the province it sits on, or whether to have a separate territ only attackable from that province (both options are appealing. The second, with the additions of aboat in each ocean, would also give a nice 42 provinces).

Overall, I don't think the bonus structure is as complicated as it sounds, and could be fun if well balanced. I like the idea of modular bonuses as it gives more strategic options to a player; it's not either I control this whole continent or I get nothing, although there's still an incentive to conquer the whole thing.

The three southernmost regions, one in each district, are all rainforest and sparsely populated, specially at the time. I'd like to represent that somehow, but wasn't sure what the best way would be. I was thinking maybe some type of attrition, or perhaps making it so that those 3 provinces can only attack each other (one way attack into the jungle provinces, normal attack between provinces, essentially, any troops brought to the jungle get stuck in the jungle, to represent the inhospitable conditions). Any suggestions?

As far as graphical design, here you go, t-o-m! These maps are what I used to design the map, and they're from 1827, contemporary with Gran Colombia itself. I was thinking of something close to this.

Almost 3 weeks with no reply. I appreciate you guys commenting, but it seems this board is pretty much dead. I mean, I know I only have a rough sketch to go off of, but I don't want to start working on graphics until we figure out roughly how balanced the gameplay is.

Just to recap in case people are intimated by the wall of text, the map in the OP is current ( but each capital is its own territory and can only be attacked by the territory it sits on), but the bonus structure is not. Here it is:

The idea is that it's relatively easy to get a bonus, and there's always a relatively easy way to expand your bonus, either by getting an additional department or conquering your whole district.

Before I make this look nice, I need:

1. Suggestions re: balance and gameplay, particularly bonus and border tweaks, and,
2. The assurance that the foundry is not dead (I remember the plentiful days of old), that, if properly executed, this mod will have the chance to see the light of day eventually, that it wouldn't be a colossal waste of time to carry this project any further.

u will have to demonstrate that u are capable of updating the map a few times before u receive the draft stamp and the gameplay starts to receive serious attention. unfortunately, very few are likely to comment on any aspect of the map when they cannot read any of the names. the first step is therefore for u to produce an update with readable names. u may choose to update the actual graphics later, but the names are essential, so that we can refer to them in our comments.

the image u have wastes a lot of space. i suggest something like the layout below as the small map (630 x 600), moving bolivar to the lower part of the map. the large map can show the same area, but expanded proportionately. one method is to use a small map at the start just to check that everything will fit within our size limits, then work only on the large map till u have the gameplay stamp, after which u can scale down the image size to produce a small version. 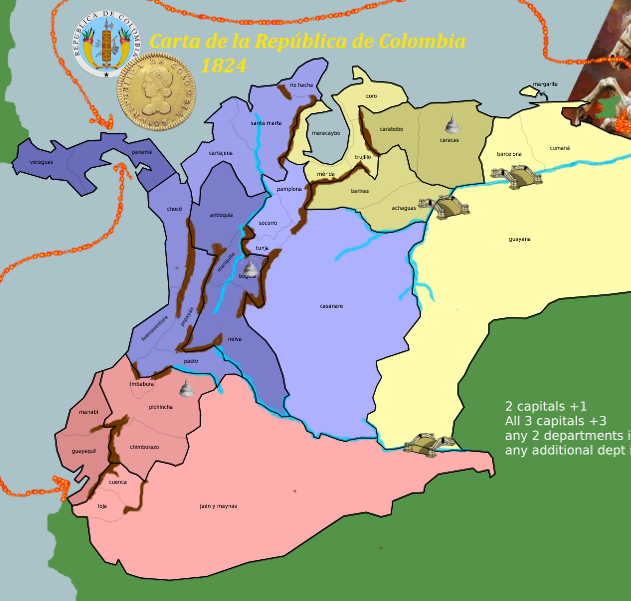 for ur bonus structure to work, experience shows that the super-bonuses must be at least +2 or even +3, otherwise they are likely to be ignored in most games. cundinamarca needs to have bigger bonus values than the other two areas because it is stuck in the middle, therefore i recommend reducing the bonus for any 2 departments in ecuador and venezuela to +2.

i like the idea of the jungle provinces being able to attack only each other.

adding ships to the pacific and carribean, without ship bonuses, is a good idea.

the capital bonuses have to be doubled to influence the play.

bonus values can be tweaked at any stage while changing only the legend, without affecting the graphics, so this is no reason to avoid updates. the more u update the map with graphical improvements, the more u encourage players to comment.